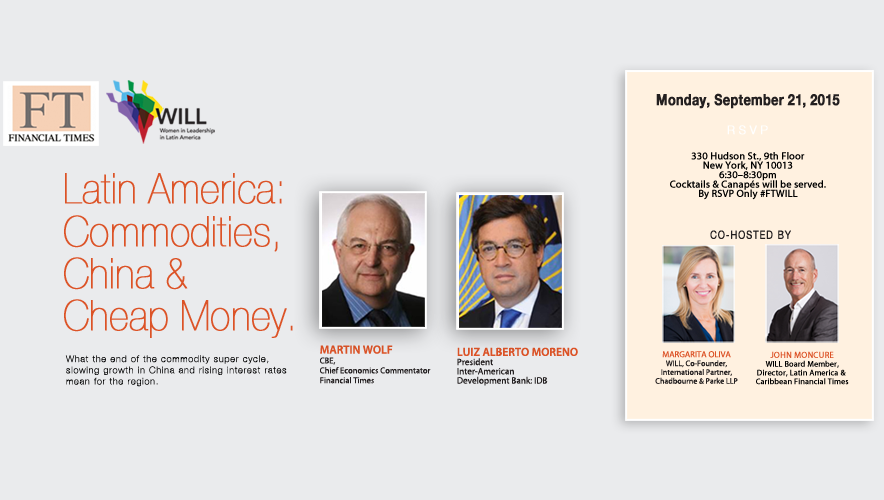 What the end of the commodity super cycle, slowing growth in China and rising interest rates mean for the region.

Martin Wolf, CBE (born 1946) is a British journalist, widely considered to be one of the world’s most influential writers on economics. He is the associate editor and chief economics commentator at the Financial Times.

Wolf was born in London, in 1946. His father Edmund was an Austrian Jewish playwright who escaped fromVienna to England before World War II. In London, Edmund met Wolf’s mother, a Dutch Jew who had lost nearly thirty close relatives in the Holocaust. Wolf recalls that his background left him wary of political extremes and encouraged his interest in economics, as he felt economic policy mistakes were one of the root causes of WWII. He was an active supporter of the Labour Party until the early 1970s.

Wolf was educated at University College School, a day independent school for boys in Hampstead in north west London, and in 1967 entered Corpus Christi College at Oxford University for his undergraduate studies. He initially studiedClassics before starting the Philosophy, Politics and Economics Course. As a graduate student Wolf moved on to Nuffield College, also at Oxford, which he left with a master of philosophy degree in economics in 1971. Wolf has said that he never pursued a PhD, because he “didn’t want to become an academic”.

In 1971, Wolf joined the World Bank‘s young professionals programme, becoming a senior economist in 1974. By the start of the eighties, Wolf was deeply disillusioned with the Bank’s policies undertaken under the direction ofRobert McNamara – the Bank had been strongly pushing for increased capital flows to developing countries, which had resulted in many of them suffering debt crises by the early 1980s. Seeing the results of misjudged intervention by global authorities and also influenced from the early 1970s by various works critical of government intervention, such as Friedrich Hayek‘s The Road to Serfdom, Wolf shifted his views towards the right and the free market. Wolf left the World Bank in 1981, to become Director of Studies at the Trade Policy Research Centre, in London. He joined the Financial Times in 1987, where he has been associate editor since 1990 and chief economics commentator since 1996. Up until the late 2000s, Wolf was an influential advocate ofglobalisation and the free market.

In addition to his journalism and participation in various international forums, Wolf had also attempted to influence opinion with his books; he has stated his 2004 book Why Globalization Works was intended to be a persuasive work rather than an academic study. By 2008, Wolf had become disillusioned with theories promoting what he came to see as excessive reliance on the private sector. While remaining a pragmatist free of binding commitments to any one ideology, Wolf’s views partially shifted away from free market thinking back to the Keynesian ideas he had been taught as a youth. He became one of the more influential drivers of the 2008–2009 Keynesian resurgence, where in late 2008 and early 2009 he used his platform on the Financial Times to advocate a massive fiscal and monetary response to the financial crisis of 2007–2010. According to Julia Loffe writing in 2009 for The New Republic, he was “arguably the most widely trusted pundit” of the crisis. Wolf is a supporter of a land value tax.

Between 2010 and 2011, Wolf served on the Independent Commission on Banking.

In 2012, Wolf stated in remarks for the Financial Times that public goods are building blocks of civilisation: security and safety, knowledge and science, asustainable environment, trust, the Rechtsstaat, and economic and financial stability.

Wolf was joint winner of the Wincott Foundation senior prize for excellence in financial journalism in both 1989 and 1997. He won the RTZ David Watt memorial prize in 1994. In 2000. Wolf was awarded the CBE (Commander of the British Empire). He was awarded the honorary degree of Doctor of Letters,honoris causa, by the University of Nottingham in 2006, and was made Doctor of Science (Economics) of University of London, honoris causa, by the London School of Economics in the same year.

Wolf is a regular participant in the annual Bilderberg meetings of politicians and bankers. He is visiting fellow ofNuffield College, Oxford, a Special Professor at theUniversity of Nottingham and an honorary fellow of the Oxford Institute for Economic Policy. He has been a forum fellow at the annual meeting of the World Economic Forum in Davos since 1999. Wolf has been named in the top 100 lists of global thinkers by Prospect and byForeign Policy magazine.

Wolf is regarded as “staggeringly well connected” within elite financial circles. His friends include leading financiers such as Mohamed A. El-Erian; politicians such as Manmohan Singh, Timothy Geithner and Ed Balls; many leading economists; central bankers such as Mervyn King: according to Wolf, he knows all significant central bankers. Despite Wolf’s close connections with the powerful, he is trusted for his independence and is known to criticise initiatives promoted by his friends when he considers it to be in the public’s interests. Wolf is widely regarded as one of the most influential economics journalists in the world. Lawrence H. Summershas called him “the world’s preeminent financial journalist” Mohamed A. El-Erian, former CEO of the world’s largest bond investor, said Wolf is “by far, the most influential economic columnist out there”.Paul Krugman wrote of him that “Wolf doesn’t even have a PhD. And that matters not at all; what he has is a keen sense of observation, a level head, and an open mind.”

Prospect magazine described him as “the Anglosphere’s most influential finance journalist”, while economistKenneth Rogoff has said, “He really is the premier financial and economics writer in the world”. In 2012, he received the Ischia International Journalism Award.

Moreno was born in Philadelphia to a Colombian father attending medical school at the University of Pennsylvania. He obtained bachelor’s degrees in Business Administration and Economics from Florida Atlantic University in 1975, and an MBA from theThunderbird School of Global Management in 1977. He was Executive Producer of “TV Hoy”, an award-winning news program, from January 1982 to September 1990. For his distinguished work in the field of journalism, he was awarded a Nieman Fellowship by Harvard University to undertake studies at that institution from September 1990 to June 1991.

From 1991 to 1994, during the administration of President César Gaviria, Moreno worked in the Colombian government in a variety of leadership positions. From December 1991 to July 1992, Moreno was the President of the Instituto de Fomento Industrial (IFI), the Colombian government’s industrial finance corporation, and a holding company for many of the largest state enterprises in the country. In July 1992, he was named Minister of Economic Development. During his tenure, he modernized the Ministry and its subordinated agencies, and led the design and implementation of Colombia’s industrial policy and competitiveness strategy. He served as senior advisor to the Luis Carlos Sarmiento Organization, the leading banking & financial group in Colombia with over US$10 billion in assets, from November 1994 to August 1997. He then served as the Andean region representative of WestSphere Capital, a private equity firm focusing on investment opportunities in Latin America, from August 1997 to July 1998.

Moreno was named Colombia’s Ambassador to the United States in 1998, which required him to renounce his U.S. citizenship. As ambassador, Moreno oversaw a dramatic improvement in Colombian-U.S. relations during his tenure in Washington. His most notable achievement was the successful effort to build strong bipartisan support in the United States Congress for passage of more than US$4 billion in U.S. assistance programs for Colombia. He held that position until 2005.

Following his tenure as ambassador, Moreno was elected president of the Inter-American Development Bank during a special meeting of the Bank’s Board of Governors at IDB headquarters in Washington, D.C. on 27 July 2005. He took office on 1 October 2005.